Holy cow! That has to be a record!

considering selwood is 'just a possie player', he must have gathered over 100 possies...

No he only he only had possies at half time.
His AS score came after that!

he had 24 possies a couple of marks and a couple of tackles by half time.....double fail on your behalf.....

Well your wrong with the tackles...but given your close attention to him..looks like someone is worried that Swan may make him look silly?

Wolves 313 def by Ridgebacks 429. 106 from Pendles and 103 from Swan were more than enough to see off the hapless Wolves. Are the Ridgebacks winding up for a third premiership or back-to-back runner's up?

Tigers 343 def by Warthogs 357. Swallow and Monfries carry a stricken Warthogs over the line, not helped by the lack of Tiger ruckmen. The Warthogs team has only one thing to say to it's coach: "Go back overseas!"

Heroes 357 def Bangers 355. This has to be wrong. Brent Stanton should have won it for the Bangers...but, oh no, the coach played him in Possessions! What did happen to Brent Maloney? Knocked out in the first minute? Who cares. I'm sure the Heroes will take the points.

Terriers 371 def by Raptors 434. All over by Saturday afternoon due to the record breaking efforts of Joel "I'm just a possession player" Selwood and Steve "I drink suncream" Johnson. What a pity that the Pod took THIS week off for "facial soreness"!

Vipers 369 def Mustangs 333. A bit of revenge in our own local showdown, me thinks. Bryce Gibbs starting to wind up with a nice 115 point contribution. Mustangs desperately need goal-kickers. Who's up for a trade?

Gladiators 391 def Maulers 347. Very even effort from the Gladdies although, you guessed it, the tacklers were out in force. Maulers need to harden up - Cyiol can't do everything!

maybe youre worried you paid too much for him...especially as croz has it in the bag!!!!!! 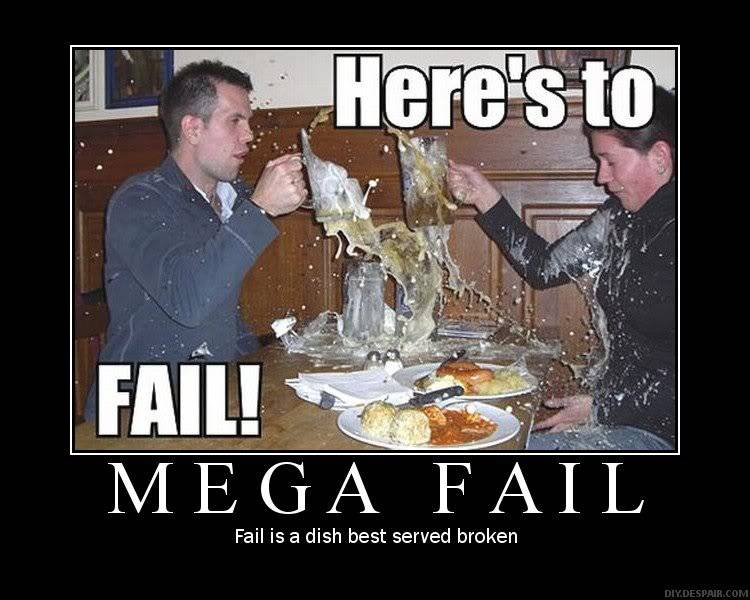 Haha...posts a fail picture...that doesnt fit on the screen.
FAIL.

i could get more childish than you...how far you wanna go?????

I maybe wrong but by my calculations; if Heroes defeat Tigers and Bangers lose to Gladdies, Heroes could sneak a top 4 birth after being out of the top 4 all year!

Correct - for the second year in a row.
I will certainly remind Coach Banger about this during the week.

Also quite an interesting battle for 8th place. If Terriers beat Mustangs next week AND raptors win, Mustangs will finish 9th. Which most will agree is fair considering their results this year. But its a big fall considering they were in the top 4 only a few weeks ago.
_________________
2014 Premiers
2014 One Heart Medalist - S. Selwood

Personalities aside (the girls are good value)...they do have the second lowest 'for' score and it would be fair for them to miss, correct.

are the girls guilty of hanging onto JB for too long????

I will say that I have been guilty of offering them a lot for JB!

Jeez they could have taken me to the cleaners!!!

Definately Pez. I've been telling them for 2 seasons ago to trade him for youth. I also said the same about James McDonald who they also kept till he retired.

Sounds like Bec with Buddy...oh boy she could cash in!

Macca wrote:I will say that I have been guilty of offering them a lot for JB!

Jeez they could have taken me to the cleaners!!!

I agree Macca. The fact that they never pulled the trigger on some of those deals proves they would never trade him.

Do they not realise they may get 3 (albeit lower quality) younger players for him?

They could build the first Mustangs flag!

bec hasnt even responded to any of my PM's....(dont tell croz that its an advantage to work with the majority of the coaches)

Whilst I agree it is an advantage, im not sure how much of one it is. Look at the coaches who are at Gleeson.

Bangers, Maulers, Wolves, Mustangs, Terriers, Warthogs & Gladdies. Of those teams only Terriers and Warthogs ever look at trading. 2 out of 7 teams isnt a high percentage. Not that I blame Croz for not trading since he has the top team.

whether they do or dont is not the issue...the fact is....i cant whisk someone to the boardroom for a high pressure sell or send a potential trade to a coach's class via student carrier or lock someone in the phonebooth with me and threaten to keep them there unless they sign etc etc feel free to add other tactics used.

Page 1 of 2
Permissions in this forum:
You cannot reply to topics in this forum
Current Round
Current Scores
Who is online?
In total there are 3 users online :: 0 Registered, 0 Hidden and 3 Guests